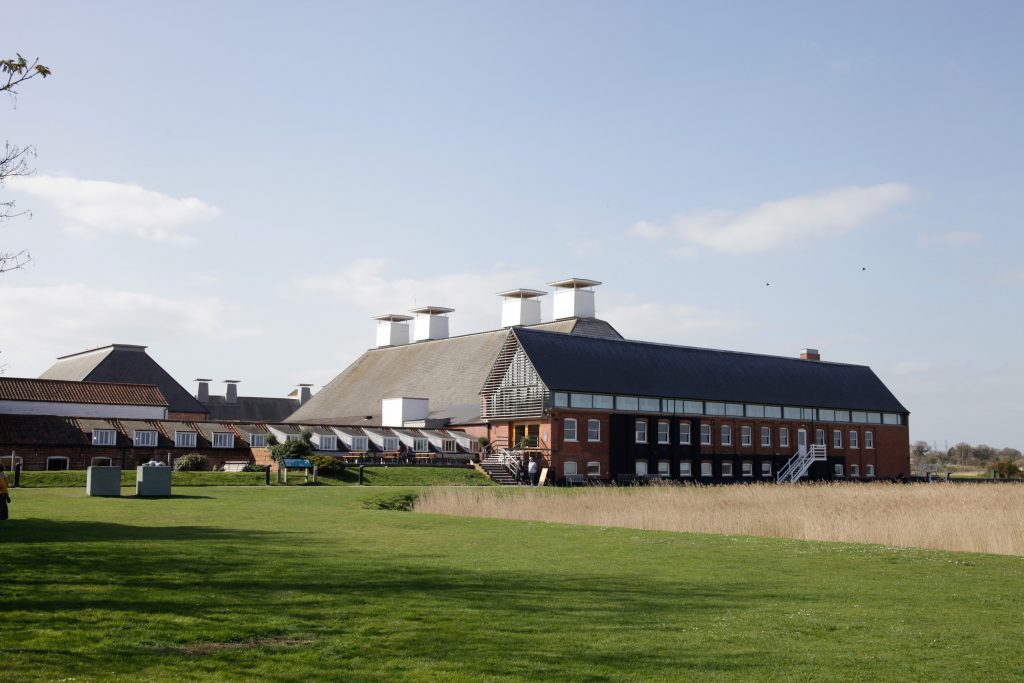 Along Suffolk’s Heritage Coast, a new kind of seaside resort has emerged in the image of its London diaspora that could be called ‘provincial-metropolitan’: homespun seaside charm with impeccably good service. Southwold and Aldeburgh are cases in point. Several years ago, former British PM Gordon Brown holidayed with his family at the former; judging by the disproportionate number of features and radio plays on these places in recent years they are also preferred destinations for the Guardian and BBC set. Aldeburgh has developed into an enclave of fine dining, high cultural tourism and leisure.

But Aldeburgh’s association with high art stretches way back. In 1948, the composer Benjamin Britten (himself from nearby Lowestoft) founded the Aldeburgh Festival of Music and the Arts with his partner the tenor Peter Pears and theatre director Eric Crozier. Towards the end of the 1960s, the festival moving to a disused Victorian maltings five miles from Aldeburgh in the village of Snape. Britten and Pears oversaw the conversion of a vast industrial building into a concert venue. Over the years, the Aldeburgh Festival has expanded to become an internationally renowned centre for musical education and performance.

Even in the early years, visual arts featured alongside music. One need only look to Britten’s pioneering work with the GPO Film Unit – where he worked with documentary filmmakers John Grierson, Alberto Calvacanti and painter William Coldstream – for evidence of his strong visual sensibility. The legacy today at Snape is a collection of permanent bronzes, including works by Alison Wilding, Sarah Lucas, Barbara Hepworth and Henry Moore, with lawns named after the latter two.

Several years ago, Aldeburgh Festival of Music and the Arts was renamed Aldeburgh Festival. The visual arts strand was fulfilled by ‘Faster Than Sound’ and commissions to accompany the festival and, in June 2011, ‘SNAP’ launched as a significant addition to the visual arts programme. Abigail Lane – once of the contemporary art trinity alongside Sarah Lucas and Tracey Emin – co-ordinates the music section, with Lucas as a very visible public face. The gallerist Sadie Coles has been instrumental in instigating the festival; she not only lends branding to SNAP HQ, several of her gallery’s artists (including Lucas) are showing work.

Last year a Guardian review of SNAP by Tim Lewis was accompanied by the strapline: ‘The Young British Artists have grown up, headed for the fields and found fresh inspiration.’ Lucas was inspired by the huge skies, the rhythms of rural life: ‘I’d lived in London my whole life, so it was like coming out of the end of a tunnel […] It’s very magical somehow.’ Lewis continues, quoting Lucas: ‘We got the keys and I stood there thinking, “What the hell are we actually going to do here? Are we just going to sit about drinking tea?”’ For Lucas’s generation of artists, lifestyle was always linked intimately with art work. Julian Stallabrass, in his book Art Incorporated (2004), argued that a direct line from personality to work is drawn, fostered by celebrity, encouraged by scene writers and gossip columnists. Lucas has matured from London’s East End into an unreconstructed rural lifestyle living in the cottage where Britten spent his last years. If Aldeburgh is so polite, what will it do for her work?

Last year, the current Chief Executive of Aldeburgh Music Jonathan Reekie speculated on the existence of a Suffolk School. Such movements usually form around networks of influence, friendships and group identification involving its own logic of inclusion and exclusion. (SNAP has its critics among the profusion of contemporary artists, Sunday painters, West End-represented artists and RAs haunting the region. At the local air field, a group of artists hired a hangar to host the counter-insurgent festival SNOOP.) The interrelation at SNAP is avowedly geographical rather than stylistic or formal. Can place-bounded identity really be the basis for a movement if, as the official literature puts it, they are Suffolk born and bred, recently settled, or frequent visitor? As the poet Michael Donaghy once noted: ‘“Movements” are dreamt up by publicists to help us all sell poetry.’

What connects the group beyond place-bounded identity is, according to SNAP’s official writer Ruth Garde, the artists’ response to Snape’s particularities of architecture and space, to its musical heart, as well as to the wider coastal locale. SNAP 2012 is a site-orientated festival: venues and spaces such as Dovecote Studio, Hepworth/Henry Moore Lawns and Derelict Buildings A/B/C have specific histories and cultural resonances activated by works. Matthew Darbyshire and Scott King’s Ways of Sitting 4 presents wooden screens that mediate between the viewer and views of permanent sculptural installations. Sections cut from the board frame the view, direct the gaze, and transform the statuary into the painterly. Coupled with each board are parodic, hubristic, texts attributed to certain well-known artists claiming art’s real social transformative power. In a particularly funny text Darbyshire and King quote Anish Kapoor:

‘One only has to look at the impact Angel of the North has had on the people of Newcastle. Anthony is far too modest to repeat this, but the Chief Constable of Northumbria Police assured him that alcohol related crime on Tyneside has gone down by 14% since Angel was erected. Not only that, domestic abuse has decreased by 17% and car theft by 21%… Temenos will be 28 metres taller than Angel; so one can only begin to imagine the effect that it’s going to have on the people of Middlesborough.’

Installed on the side of the main concert hall, Ryan Gander’s This Place is Everything is a Schwitters-esque billboard collage. A torn Toyota ad peels away to reveal text from a Budweiser ad; the contrasting texts read ‘This Place I(s) Everything’. Typical of an urban environment, it is effective simply for the way it genuinely confounds so many peoples’ expectations of Snape. Given his proclivity for mischief I had expected more good taste-baiting from Gander. Perhaps it is too easy at Snape?

The most compelling works are gathered around Derelict Buildings A/B/C. May Cornett’s The Walled Garden installs the kind of ‘unofficial nature’ Richard Mabey celebrated in his walks around London’s industrial hinterlands in the early 1970s. In Conett’s installation native wild flowers grow in profusion atop stacks of bricks and roof tiles; white resin polyhedron casts echoing ‘Dürer’s Solid’ – the ambiguous polyhedron shape in his 1514 engraving Melencolia I – contrast with the surrounding entropic forms.

These Derelict Buildings are art works in themselves, haphazardly arranged Wunderkammern of bygone junk and curioso, and the works inside had to compete for attention. Emily Richardson’s Over the Horizon is an intelligent match. Ruins and decay – whether of Modernist architecture, potential scenes of environmental disaster or, as in Over the Horizon, Cold War infrastructure – have been abiding themes in Richardson’s film and video work. Her collaboration with sound recordist Chris Watson at SNAP presents an impossible experience of the nearby landscape of Orford Ness which for many years was home to a top secret Atomic Weapons Research establishment. Out of the nebulous horizontal landscape emerge eerie decaying military buildings that resonate in complex ways with the installation space.

On the Henry Moore lawn, Gavin Turk’s L’Âge d’or (green) faced a 1989 bronze by Moore, Large Interior Form. Turk’s punning title refers at once Luis Buñuel’s 1930 Surrealist classic, while describing the work itself – literally, a large door. Once the pleasure of a felicitous punchline passes a stranger psycho-psychotic-macho drama emerges in the stand-off between Moore and Turk on Hepworth’s lawn.

On the first day at SNAP, I witnessed Turk, along with Lucas and friends, arrive at Snape. They came across Hepworth lawn like a queer rag-taggle bohemian harem, Aspall cider in hand. It is unimaginable that Aldeburgh Festival’s top performers – Pierre Laurent-Aimard, Peter Serkin or Florian Boesch – would be seen in anything less than formal wear. No doubt this sartorial difference between musicians and artists is culturally and historically tied to customs of attending art exhibitions and concerts. Perhaps it is just more visible against the backdrop of Snape? And yet Aldeburgh’s programme certainly is not inherently conservative. It seems instead that SNAP fills a liberal lacunae and sanctions the myth of the bohemian artist.

Liberalism and queer, but not quite all out bohemianism, has been a latent force at the Festival from the beginning. When Benjamin Britten died in 1976 the Queen sent Peter Pears a message of condolence – a gesture of no small significance. At its best SNAP reminds of this nurturing liberal spirit of the place. But then there is always this lingering suspicion that all this simply strengthens a brand, an advanced art lifestyle choice: retrace the Rings of Saturn, visit the gift shop, buy a SNAP portfolio… Shit, may it continue, at least if it fends off the cringingly inevitable advances of a rather different beast: Tate Yarmouth.