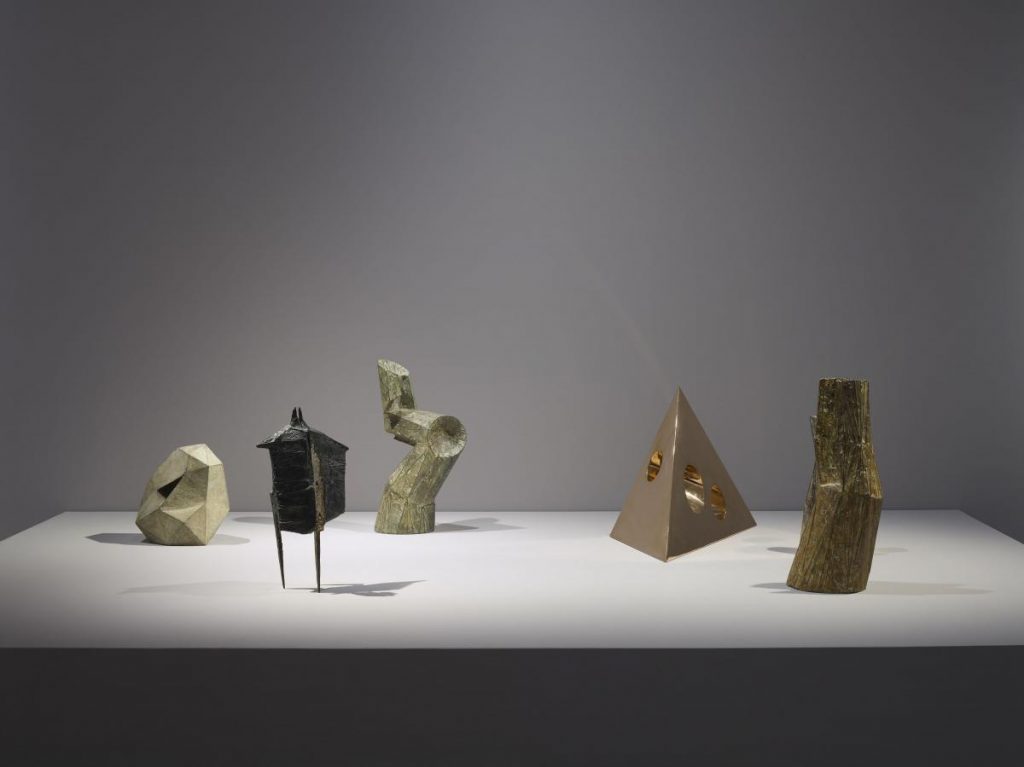 When Italy entered the First World War in Spring 1915, the Greco-Italian painter Giorgio de Chirico departed the Paris of Pablo Picasso and Guillaume Apollinaire to enlist with his brother. They were billeted with the 27th Infantry Regiment in Ferrara, far from the front line, where their mother rented them furnished rooms in the via Montebello. Inspired by Ferrara’s interiors, windows, shops and strangely shaped biscuits glimpsed in the bakeries of the former Jewish ghetto, De Chirico began painting what he called ‘metaphysical interiors’.

‘Revolt of the Sage’, curated by the artist Simon Moretti and Craig Burnett, takes its name from one such peculiarly hermetic interior, painted in 1916. In this, the exhibition’s absent lodestar, jostling angular frames push up against the picture plane. Behind, a slanting striated panel, flickering unstably between being a ceiling or a wall, leads to an opaque Renaissance window of Veronese green. Laid out on the canvases are specimens of those strange metaphysical biscuits. De Chirico may have maintained the pretence of life as normal, not permitting war imagery into the paintings, but The Revolt of the Sage evinces finite, enigmatic stasis anxiety. And this despite his professed belief in metaphysical timelessness: ‘Time does not exist,’ he wrote to Apollinaire in July 1916, ‘and on the great curve of eternity the past is the same as the future.’

Temporal contortions frame the work of 16 post-war and contemporary artists exhibited in ‘Revolt of the Sage’. Stood blankly in the foyer is Lynn Chadwick’s importunate bronze, Cloaked Figure IX (1978). Beyond hangs Michael Simpson’s Squint 33 (2016), a sanded-back oil painting of an empty plinth. Its palpable absence appeals to the vertiginous gaping hole at the centre of John Stezaker’s Mask (Film Portrait Collage) CCIV (2016) just opposite, in which an Alpine view from the mouth of a railway tunnel interrupts a smart 1940s studio portrait of a woman: an expressway into the treacherous landscape of the mind. This is how we enter: cloaked, squinting and masked, vision and visibility baffled that we might attune to the hidden psychological resonance of works.

Many of the works on display use collage, fragmentation and layered imagery. Moretti’s silkscreen collages, gathering, for instance, Kenneth Clark, a termite mound and a constructivist doodle in Untitled (to Kenneth Clark) (2014), share with David Noonan’s Untitled (2013) a sensuous formalist eye. Their murkiness, reproductions of reproductions, contrasts with the clear-cut luminosity of Haris Epaminoda’s collaged interventions in classical Greek landmarks. Water streams from the Kerkides into the orchestra in Untitled #21 c/g (2011). In another, Untitled #21 c/g (2011), a screen, not unlike de Chirico’s Veronese window, bisects colonnades in the Canopus of Hadrian’s Villa, Tivoli; a latter-day copy of Neptune reclines on display in the foreground.

There are bodies, glimpses only, in Goshka Macuga’s ‘Tichy’ prints constructed from the abandoned archive of Czech photographer Miroslav Tichy who, for thirty years, made surveillance-type images of women using homemade cameras for private consumption. Macuga’s appropriation in the ‘Tichy’ series (2013) – but one manifestation of an ongoing engagement – shows black and white photographs of clothed torsos covering lurid colour prints of, presumably naked, models. Macuga quells their scopophilic gaze by returning them into public. In her extraordinary sculpture, Untitled (2010), there’s a hint at anthropomorphism in the form of petrified wood mounted on white marble and oak plinth. Nearby Paloma Warga Weisz’s Still Life (2016), a sleeping life-size carved wooden figure beneath vials containing powders and crystals, the transformation of wood into stone feels miraculous but is ultimately banal. Weisz’s figure activates an alchemical narrative.

Cumulatively, in ‘Revolt of the Sage’ there is a sense of artworks withholding. The task is not to unriddle their relation to de Chirico: as in his paintings, enigmatic space is as charged with meaning as content.