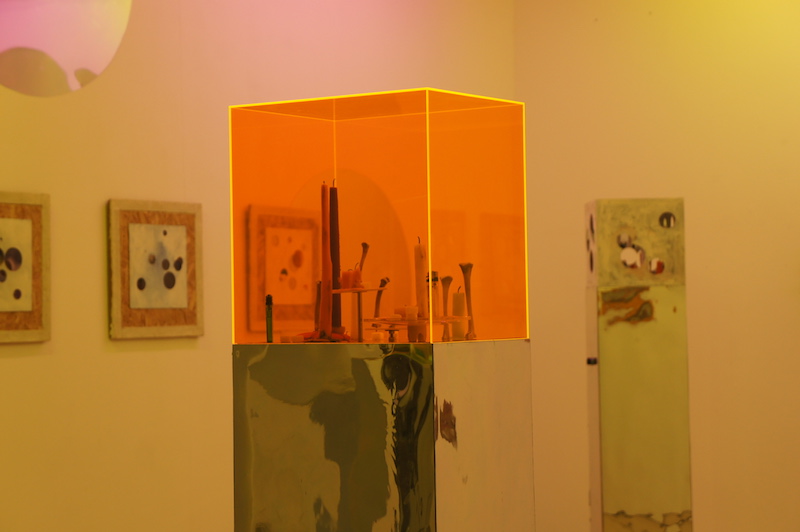 When the French restaurant beneath Eros House in Catford was evicted following complaints of late-night raves-cum-orgies, the new tenants kept its name: Le Bourgeois. It’s an irony not lost on Stephan Dillemuth. Crummy, gleeful, serious, his installations in “Diskodekorationen: From Another Century” literally decorate a disco, or what’d been a sort of disco before the artist-led gallery seized an opportunity at London’s art periphery.

This show’s title accents another kind of distance: Between 1987 and ’89—in another century—Dillemuth, on a Bavarian grant, moved to Chicago, where he encountered the mostly black and queer spaces of house music. There, sampled soul lyrics cut to looping four-to-the-floor kicks and squelching 303 bass availed a new techno-futuristic aesthetic. Curator Saim Demircan writes that the alternative sociality of the dance floor influenced Friesenwall 120, the celebrated Cologne storefront gallery Dillemuth co-ran during the ’90s.

At the center of Le Bourgeois, a trio of mirrored vitrines, topped with tinted, florescent Plexiglas cases, display maquettes of discotheque interiors. Tiered chrome podiums hold speculative designs of melting candles, sugar cubes, cigarette lighters, and chicken bones peeking through apertures. Originally made in 1989 for his “Disko” series, Dillemuth has amended them here to bear the names of commercial London nightclubs, such as Gatecrasher or Mojos. Among them, a cast of the artist’s head, studded with ossein protrusions, roams around atop a robotic mirrored pedestal on wheels (Parallaxis Disconiensis: Clown or Clone?, 2017). Caught in the exhibition’s many-mirrored surfaces, its nu-psychedelic iridescence, the viewer’s body is offered back as a warped and disintegrating outline.