Tilbury Port, 1967: the design critic Reyner Banham noted vast shed-lined landscapes of single, unbroken ten-acre tracts. The shed, ‘a stiff tent’ made of hi-tech materials, corrugated asbestos and ribbed aluminium, found its form around the increased import of containerized goods in standardized steel containers. An early Modernist ideal made manifest, these sheds could be perfectly designed by engineers without architects’ interference. At Tilbury Banham diagnosed a new kind of space: a decentralized flatscape with unpredictability designed out – an expression of capitalist expediency.

Global shipping, containerization and oil in Tilbury, London Gateway and Thames Oil Port provided the backdrop for Hannah Sawtell’s recent exhibition, ‘#STANDARDISER’, at Focal Point Gallery, a little further up the Thames Estuary in Southend-on-Sea. They suggest materials, motifs and themes which, in the show, collide with objects of the New Industrial Revolution said to be underway right-now-any-place-wherever-with-connectivity, facilitated by peer-to-peer currency such as Bitcoin, 3D printing and open source soft- and hardware on the internet. Here, conditions of ‘post-’ and ‘late-’ capital meet.

Docks have always been nodes: a point at which lines in a global network intersect. Are these comparable to nodes in digital networks? What new forms of standardization and expedience, like those seen at Tilbury nearly 50 years ago, occur or have occurred online? These were a few questions implied by an exhibition that itself wanted to be considered a network. The eponymously titled installation #STANDARDISER (all works 2014), in Gallery 1, is a node, with all other works, in the window gallery, reception and Gallery 2, individually titled as extensions of this root hashtag. Navigating this network, a proxy for others, we were confronted by novel, but not entirely unprecedented, philosophical questions of value and exchange, labour and creativity, personal freedom, the state, standardization and ownership. 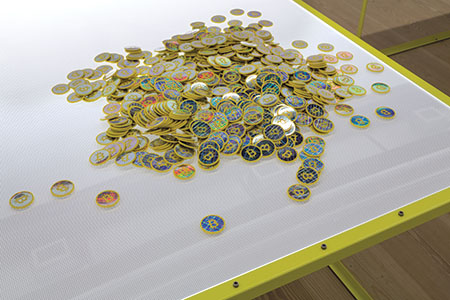 In Gallery 1 a parabolic acoustic wall screens the view but not the pervasive, low-frequency beat. The wall pushes you out to the edges of the space and then gathers you back between it, a corresponding video projection and two MDF speakers and sub woofer. Apart from the grounded sub woofer, these elements hang from a luminous orange steel frame. Sawtell designed this ‘modular acoustic display system’ (her own words) to configure the acoustic wall with the speakers to concentrate sound waves in one area of the room. Diedrich Diederichsen has called this affective field within physical space Sawtell’s ‘industrial psychedelia’. At Focal Point, Sawtell’s intention was to produce a ‘dense digital situation’ as a condition for viewing the video – suggesting we consider the low-frequency beats and the rests between them as a fluid binary stream.

Sawtell has described her audiovisual works as ‘decelerated repetition’. If for Hito Steyerl in Liquidity Inc. (2014) waves symbolize the forceful liquidity and speed of corporate capital, for Sawtell the most apt decelerationist liquid is oil. In the animated HD video, produced using freeware on a tablet device, oil drips, coagulated, over a proposal for a luxury Norwegian hotel in the shape of a floating glass snowflake. (I think of the Thames’s links to oil-rich Norway: Oslo’s waterfront redevelopment, home to the country’s most expensive property and the privately funded Astrup Fearnley Museum’s new, super-slick Renzo Piano-designed HQ.) Paired with this, forming a diptych, was a slow aerial tracking shot that circles a computer-generated cooling tower. Beyond the tower, a single wind turbine loops in and out of shot, in sync with the ten minute loop of these videos. Sawtell projects them onto a bullet-proof polycarbonate plastic sheet, as if to repel the cliché of camera-as-gun: CGI, after all, is cameraless.

In #STANDARDISER_SQUATTER (2014) steel security screens partially covered a brightly lit display cabinet containing a large tub of 3D-printed Bitcoins. Normally used to prevent access to vacant properties, these screens were hired for the exhibition’s duration, functioning ambiguously between revealing and concealing, keeping in and keeping out. One thing’s for sure: it was not to guard the loot. Bitcoin is an entirely virtual currency that only has online value in relation to other users on a peer-to-peer system. This decentralised vehicle of exchange has caused great excitement since its launch in 2009. Currency holders are connected directly to one another, without the need for a central reserve or banks. Identities are hidden in transactions, shielding users from data mining, but at the same time raising fears among the sensationalist press of its criminal use. Because Bitcoins have no physical form, what we see here is the artist’s speculative design.

Bitcoins, this time loose, were heaped alongside a litany of CNC’d and 3D printed objects in Gallery 2. A tooth, Google glass, the ebola virus, a drone propellor, the British Standards logo and a router, among other things, were arranged in a quasi-anthropological display atop a table specially designed by Sawtell. Designs for these objects were downloaded from free open source user-created files available online. Here, Sawtell’s mediation was felt least. If, as the gallery literature suggests, we regard this display as akin to a retail environment, they are curiously indifferent, as much interest as a high street 3D print shop.

Orange vinyl British Standard Kitemark logos repeated in diamond patterns on the gallery window. The motif, introduced in 1903 to identify products that meet British manufacturing standards, may be the key to understanding the exhibition’s ambivalent title, #STANDARDISER. British Standards directives have real restrictive consequences for industrial design, but a standardizer is also one who can set new norms; who can innovate rather than regulate. Here, Sawtell is the #STANDARDISER, decelerating hi-tech materials designed for expediency.