Earlier this year the Great Yarmouth-born filmmaker Greg King introduced me via email to a ‘video content producer’ – we’ll call this person ‘Alex’ – for the Guardian newspaper. (Greg, a former professional skateboarder, directed several influential East Anglian scene films, including Reservoir Skates, 1997-98, and Underground and Overrated, 2002, and taught Lewis ‘Chewy’ Cannon, the most talented of young British skateboarders today, to skate.) This person was ‘looking into doing a piece on a Norfolk town and trying to get some specific info’. Greg introduced me as ‘a fellow GYB head and the most knowledgeable yarco to date’. There was no consultation fee for this knowledge.

Greg’s evocation of a ‘knowledgeable yarco’ was not written without humour. In 2005, the Collins English Dictionary admitted the word ‘yarco’, defined as ‘a young working-class person who dresses in casual sports clothing’, along with its national and regional correlates – ‘skanger’ from Ireland, ‘ned’ (non-educated delinquent) from Scotland and, of course, ‘chav’ (if such dictionary admissions speak of culture on the move, this was the cruel year of ‘Asbo’, ‘adulescent’, ‘property porn’ and ‘exhibition killing’). The regional inflection of chav, ‘yarc’, is proudly used to self-identify by those of us from working-class backgrounds who grew up in and around Great Yarmouth. Perhaps it doesn’t wound because we made it out. 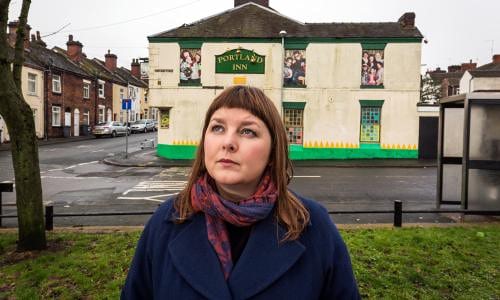 Google Search revealed that Alex had co-produced ‘Made In Stoke-on-Trent’, a Guardian video series funded by the Rockefeller Foundation, made after some of the city’s residents disputed its characterisation as ‘Brexit Capital of Britain’ in a previous documentary for the newspaper. On the way to its bid for UK City of Culture 2021, the Hardyesque remake follows, amongst others, ebullient YMCA youth workers, a besmocked artist in a £1 house who plans to reopen the derelict local as a community ceramics social enterprise, and a skate shop owner (he and all his clients have beards) in the ‘cultural quarter’ who commissioned the New York-based graffiti artist FAUST to throw up ‘PREVAIL’ on a wall.

In a town where bet365 is the largest employer, we see long shots of comatose users of the synthetic drug ‘spice’ and hear from pessimistic residents who, hit by the spare room tax, find it hard to prevail. Cut to an Audi-driving property developer who shows a group of fey ‘creatives’ around the ruins of a ceramics works: once used to farm cannabis, it now accommodates a charity for people with mental and physical disabilities to recycle computers, a scented-candle business and ‘bouncercise’ classes – high-energy exercise on a trampoline. ‘It’s available for interesting things at the right price,’ chortles the developer.

‘Well,’ I emailed Alex, ‘I would suggest Great Yarmouth. It has everything a Guardian voyeur could wish for.’ Poverty. Teenage drug mules along ‘county lines’. UKIP success (and failure). A large and diverse economic migrant community. One of the highest percentages of Brexiters (by rights it is, with Boston and South Holland (ironic), Brexit capital – 72% voted to leave). A high street ruined by out-of-town shopping centres. Unprecedented homelessness. Among the 10% most deprived neighbourhoods in the country. A folly of an outer harbour project that no one has been held accountable for (the council ensures its success by touting a second bridge to link the harbour to the A47 road out of town – a single-carriageway which couldn’t accommodate increased road use anyway – resulting in the compulsory purchases of houses). Brandon Lewis, Great Yarmouth Conservative MP and former housing minister, has recently been made chairman of the Conservative Party. ‘What I’m looking for’, Alex explained to me, ‘is really wide, anything from a place with a particularly acute social problem, to a person or group who are trying to remedy something.’ 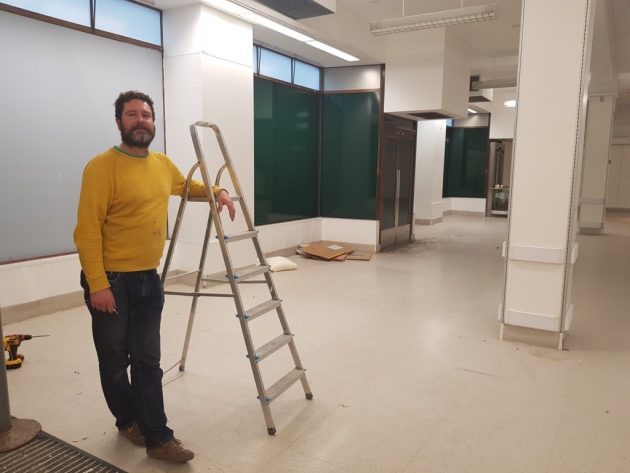 I introduced him to the artist-curator Kaavous Clayton who, with his partner Julia Devonshire, runs originalprojects in Great Yarmouth. Kaavous and Jules had helped establish the artist-led gallery Outpost in Norwich many years before and, more recently, after quitting their respective curatorial jobs in Colchester and Ipswich, moved to Great Yarmouth to initiate community-based projects, including opening a gallery. Curiously enough, one of their first jobs when moving into a property was to clear the hundreds of dead cannabis plants left behind after a police raid. They came away with a percy ounce.

‘The bait of fiasco’, Kaavous wrote to me after the introduction, ‘can be a good draw … Places like Great Yarmouth are naturally curious because of their failures, but the hidden side can surprise.’ In addition to a gallery programme, originalprojects is working to organise a sonic arts festival called ‘Yarmonics’, art and design classes to encourage disadvantaged young people into higher education, commissioning public art by international artists, displaying people’s collections of objects from across Great Yarmouth and, most recently, organising language exchange sessions around food for Portuguese and English speakers.

On Friday 20 April, originalprojects convened the ‘Creative Workspace Summit’ at St George’s Theatre in Great Yarmouth on behalf of East Coast Visual Arts Network (ECVAN), a group of contemporary visual arts organisations based in the Eastern region of England, chaired by Wysing Arts Centre, and Making Waves Together, an initiative led by Great Yarmouth Borough Council to ‘put arts, culture and heritage at the heart of the local vision’. Commencing with a keynote lecture by the urban consultant Charles Landry, the subsequent presentations – ECVAN was well represented – were organised around three themes: ‘Long term planning’, ‘Meanwhile-Use and Artist-Led’ and ‘New Models of Working’. 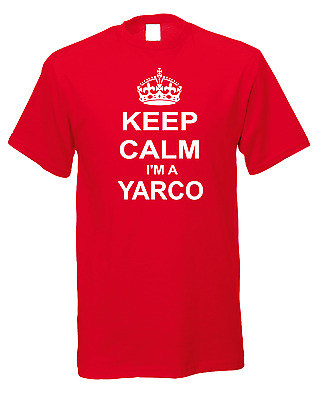 With characteristic humour, Kaavous congratulated attendees for choosing the Summit over the Skamouth Weekender of ska punk music in nearby Vauxhall holiday camp and the grand reopening of Pound Stretcher. ‘Creatives,’ he began, ‘have a major role in creating great places, and creative workspaces can help make the most of a place’s potential, allowing a community to thrive, adapt to change and work to improve their environment.’ Pointing to the threat to affordable studio provision in London, he anticipated that this would have ripple effects on locations outside the capital, remapping the contemporary art mass. Margate and Folkstone are the most visible examples of this (however, unlike Great Yarmouth, these are within 60 minutes of London by train) and SPACE has begun negotiations with Colchester Borough Council to take on its first space outside London. As emerging technologies enable creatives to work nomadically, how, Kaavous asked – echoing the words of a former Great Yarmouth Borough Council employer, Robert Gregory – can we produce ‘regeneration without gentrification’?

Landry wasn’t the person to answer such a question. His slideshow, a globetrotting photo album of arty things, from Helsinki to São Paulo, mostly showed projects initiated by large developers (hugs for free, hip hop for peace, escalators in the favelas), interrupted by illustrative photographs supposed to convey key ideas, such as ‘work’ and ‘flexibility’, but that were often hilarious visual malapropisms. We need, Landry said, to re-establish trust between the citizen and private corporations, as he went on to advocate top-down, instrumental processes – what he called ‘bureaucratic creativity’ – as though engagement with big capital regeneration were an inevitability. We have to be willing, so he suggested, to shift from a ‘no because’ culture to a ‘yes if’ culture.

In unconscious acknowledgment of his own platitudes, perhaps, he frequently noted what he needn’t say because we all knew it already: a flatter offensive, it left many basic definitions and ideas unexamined, which was not helped by his aphoristic manner of speech (‘How can people of difference connect and come together? A central issue of our time. How to bring them together in a shared space where they can feel roughly okay?’). Landry’s book from 1994, Creative City, is often seen alongside the American Richard Florida’s The Rise of the Creative Classes, 2002, advocating creative economies in post-industrial cities. From tech to information to artistic, the capacious problem is in the very different economies under the moniker ‘creative’. And in Landry’s understanding of the role of the arts in place-making, at least in his Keynote, grassroots activity is almost absent. A critic once referred to Landry as a ‘lefty Thatcherite’, which might be another way of saying that he’s a Blairite neoliberal. Landry was useful as a lesson in what to avoid.

Opening the afternoon’s proceedings, in the ‘Long Term Planning’ session, the imprecision of ‘creatives’ was reproduced in several presentations, including HAT Projects, an Essex-based architecture practice, whose calculation of affordable space assumed artists to be entrepreneurial businesses in the way tech start-ups are. Along with their romantic characterisations of artists’ studios, it wasn’t clear how their beautiful buildings were in fact sustainable for artists.

Discussing ‘Meanwhile-Use and Artist-Led’ space, members of Outpost studios in Norwich parsed the history of the space and gave a rather uncreative projection of its future as it faces eviction by developers. There was a tension in this section between short-term use and a model of sustainability linked to exponential growth. Paradise Works, for example, seems to aspire to the status of quasi-institution. Jon Wakeman of East Street Arts bragged of establishing arts organisations under seven different names to apply for seven different Arts Council grants in the heady 1990s. Throughout the latter part of this period he was able to sign on and work voluntarily on East Street Arts. Today, an aspect of the group’s business (its struggling to cease being a National Portfolio Organisation) is seeking empty properties and making them available to artists for studios and galleries. Functioning as a ‘middle man’, East Street Arts skim off fees for brokers and finders, staff, partners, overheads and surpluses. originalprojects and Dyad Creatives both have spaces provided by East Street Arts. To what extent might this offering discourage creative artist-led activity?

‘Creative Workspace Summit’ impressed on a large number of attendees from across ages and backgrounds a number of things: the seriousness of originalprojects’ intent in Great Yarmouth, the existing infrastructure of inspiring arts organisations across the East Anglian region and beyond, and the sense of possibilities for new ways of working. Landry, who puffed on a Churchill cigar at lunchtime, didn’t fit. The creative classes became a marketing strategy, a way to a have a jolly to the seaside or the favelas. It’s clear that a more nuanced understanding of the respective economies that fall under this moniker, ‘creative’, is urgently required. While entrepreneurial tech has potential use value, art is not predicated on this.