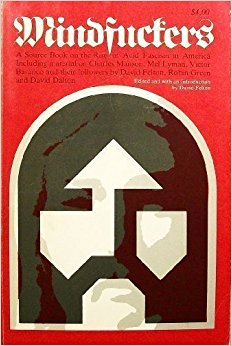 The book, with a cover that ranks as one of the best, consists of articles first published in Rolling Stone magazine exploring the spiritual void created by the comedown of acid revolution.

I understand there’s a certain fetishisation of Manson and The Family, but Felton’s book is not, I believe, some marginal curiosity. Perhaps this shift in American consciousness was accompanied by an erosion of conscience? Specifically, I became interested in it as a dark imagining of the intersection of West Coast hippiedom and corporate culture that, today, speaks to the export of subcultures with global tech exports. But it also addresses (sometimes paranoiac, fearful) intersections of race and sexual politics, societies of control, and community, among other things. Formally, too, it is intriguing for its playfulness. (Felton went on to pen episodes of Beavis and Butt-Head!)

Because it’s hard to find and I was probably procrastinating I decided to serialise it as an audiobook.